THE INSPIRATION
It’s funny to be posting this on a day with zero chance of precipitation, but the start of last week was all rain, and the weekend forecast wasn’t looking much better. (I’m going to Seattle at the end of the month; clearly New York has been testing my rain tolerance.) So I wanted to take on a food project fitting for a rainy day, since between the weather — which actually ended up being OK! — and the train I live near undergoing some major weekend construction, I wasn’t planning on going far from my apartment. So I picked up a few jars and took my first trip to the Brooklyn Kitchen, where I picked up a candy thermometer, canning funnel, and a super-awesome little book about jams, jellies and canning.

Making jam and canning is sorta labor-intensive, and I was definitely nervous about jars exploding while I was boiling them, but the whole thing was actually pretty exciting and I will totally be doing it again! (Even though the second batch I made was too runny…whoops!) Also, you can definitely use this recipe for my next recipe post.

THE PLAYLIST
Some songs about rain! If you’re on Spotify, you should be able to check out the playlist here (please let me know if it doesn’t work!). Here are the songs:

THE RECIPE
Adapted from Jams, Jellies & More, a Storey Country Wisdom Bulletin book by Carol. W. Costenbader. I did my best to explain my own directions, but considering this was my first jam/canning experience, I highly recommend buying this book (only $4 at The Brooklyn Kitchen in Williamsburg) or something similar for more tips. Makes almost four 8-oz. jars.

Supplies:
Three 8-oz. canning jars with new lids, plus a fourth container for the extra
Candy thermometer
Funnel (optional, but it will make this much easier)
Stockpot
Tongs
Dish towel

• Mix together the raspberries, peaches, sugar and lemon juice in a bowl. Let sit for two hours while the sugar dissolves. Stir occasionally. 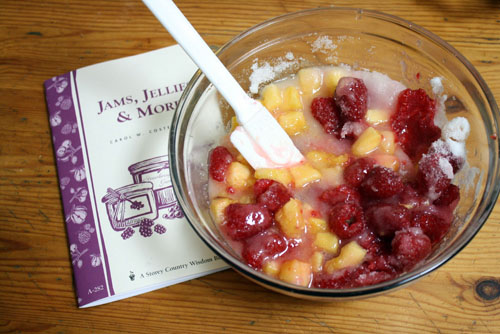 • Pour mixture into a pot. Bring to a boil, then let simmer until it reaches 220 degrees Fahrenheit, stirring frequently. The original recipe says this should take 5 minutes; however, it definitely took me longer than that, and I had to turn the heat up pretty high to speed it up. If you’re not using a thermometer, there are a couple ways to test to see if it’s done; this site has a good explanation of that, and some other tips. If the mixture is too runny (like my second batch — peach/plum/thyme — was…), keep cooking it.

• Remove pot from the heat and use a metal spoon to scoop off any foam at the top.

• Start boiling water in a large, tall pot (I used a stockpot); enough so that when you put the jars in, there will be at least an inch of water above them. In a small pot, start boiling the jar lids in water.

• While you’re waiting, use the funnel (or a spoon, but a funnel will be easier) to fill the jars until there’s 1/4 inch of room left at the top. I didn’t have quite enough to fill four jars, so I poured the rest into a glass container to keep in the fridge. After the lids have been boiling for 10 minutes, remove them from the heat and use tongs to place the metal screw rings and lids on top of each jar. Do not screw the lid on too tight!

• When the water in the stockpot gets to 180 degrees Fahrenheit, use tongs to place the jars in the pot. Cover the pot and bring to a rapid boil. Keep the jars in there for 15 minutes beginning when the water started boiling. Use tongs to remove the jars from the water and set on a towel. You will probably hear the lids pop. After 12-24 hours, you should be able to lift the jars by the lid (not the screw-on part) without it coming off. 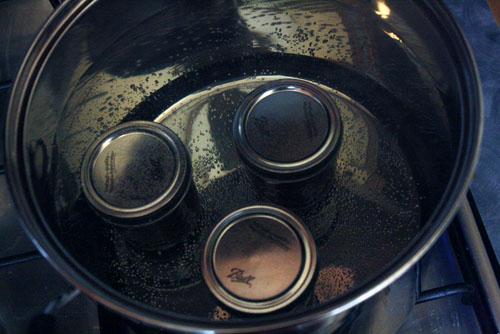