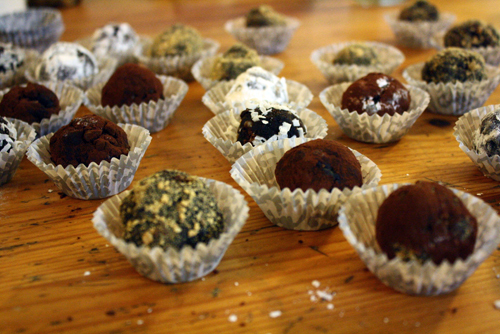 THE INSPIRATION
Confession: I was embarrassingly late on listening to Sleater-Kinney. As in, they broke up in 2006 and I didn’t get super into All Hands On The Bad One until about four years later. (I will now cover my eyes so I can’t see your totally disgusted faces shunning me. But don’t worry, I got on that Wild Flag record reeeal quick.) Needless to say, they’re on the long, long list of bands I wish someone had told me about when I was in high school. Anyway, it goes without saying that that album is incredible, and these whiskey balls come from a line in “You’re No Rock N’ Roll Fun” about “whiskey drinks and chocolate bars.” The first line of the song — “You’re no rock ‘n’ roll fun/ Like a party that’s over before it’s begun” — hits home for me because when my friends and I go out, I tend to be the one who gets tired super early, and I’m frequently hassled about my inability/refusal to take shots. I also don’t like whiskey! (See? Ms. No Rock N’ Roll Fun over here.) However, now I can say that I sometimes like whiskey: when it’s baked in a cake, then turned into little balls of chocolatey, sugary, walnutty goodness (mixed with even a little more whiskey). These were kind of amazing, and they’ll certainly be replacing any future urge to make cake balls: They’re quite similar, but because these babies use sugar and booze to bind the cake crumbs together instead of buttery frosting, they don’t result in obnoxiously greasy hands, and they don’t feel as heavy to eat.

Unrelated to the great S-K: I took these treats to a super-cool event called BAKINGMAKESFRIENDS — which is pretty much exactly what it sounds like. Lillie from the gorgeous baking blog Butter Me Up Brooklyn, started this shindig, to which you bring baked goods and friends, and hang at a bar to trade treats and meet new people. Lillie made bourbon blondies (obviously we were on the same page), and among my other favorites were chocolate ginger cookies, poppyseed buckwheat cookies (trust me, they were SO good), cardamom baklava, mustard spice cookies… I could go on and on. Anyway, it was lovely and I’m looking forward to the next one!

END_OF_DOCUMENT_TOKEN_TO_BE_REPLACED

THE INSPIRATION
Pepper Rabbit just released an album called Red Velvet Snow Ball. I believe it’s named after some kind of sno-cone, but this is my interpretation! Clearly this has nothing to do with the actual band, and that’s OK; I made them for my old roommate Petra’s going-away shindig, because she is the first person I think of when I think of red velvet cake.

END_OF_DOCUMENT_TOKEN_TO_BE_REPLACED 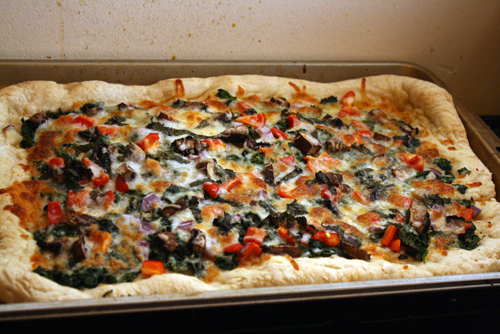 Hey guys! I’m going to test out a new thing on Fridays where I post a roundup of stuff I cooked/baked throughout the week, as well as some music I listened to. You (my friends, I think the only people who read this site so far) ask me pretty regularly for recipe/meal ideas, and also for music recommendations, so I’m hoping this will be a handy way to give you that. Let me know if it actually is helpful!

END_OF_DOCUMENT_TOKEN_TO_BE_REPLACED

(All the good photos by Paul Dadowski)

THE INSPIRATION
If you’re familiar with the electro-pop duo Matt & Kim, this one doesn’t need much of an explanation. This inseparable Brooklyn-based couple — Matt Johnson (keyboards and vocals) and Kim Schifino (drums) — is an explosion of smiley faces, rainbows and energy. These cake balls also explode (hello, Pop Rocks!), they’re guaranteed to cause smiley faces, they have rainbow colors, and they will give you energy — maybe even too much. This was my first time making cake balls (or eating them, for that matter), and they were as much fun to make as they were to eat. I highly recommend taking on this project with someone who has never eaten Pop Rocks before, like my friend Jill, because it will be a hoot. Also, how can you not giggle every time you say cake balls? CAKE BALLS!
Matt & Kim on MySpace