THE INSPIRATION
One of my favorite records that came out this year was the self-titled debut from Brooklyn act Widowspeak, and Halloween was a perfect excuse to use it on here: Their music is full of eerie, smoky (and gorgeous) vocals, and there’s a song called “Nightcrawlers,” in which frontwoman Molly Hamilton sings, “Nightcrawlers stay up late, nightcrawlers take the blame.” I made the classic little-kid cupcakes with cookie “dirt” and bugs (specifically, gummy centipedes from Economy Candy and Willy Wonka Sluggles — possibly the cutest name I’ve ever heard for bugs), and for the lyric about staying up late I thought of caffeine (and, of course, the sugar highs kids get from their Halloween candy) and made the cupcakes pumpkin coffee-flavored with mocha frosting. Happy Halloween!

END_OF_DOCUMENT_TOKEN_TO_BE_REPLACED

THE INSPIRATION
Toronto band the Wilderness of Manitoba make lovely folk music based on hushed harmonies and lush, organic arrangements. Their album When You Left The Fire was made for this time of year: They mention breezy nights (“Orono Park”), devils dancing in the trees (“November”), and crashing waves (“White Water”). There’s also a song called “Golden Beets,” so I wanted to make a dish centered around those lovely beets that do not make a big, fuchsia-colored mess. It needed to be hearty and have a lot of components (kale! pomegranate seeds! apples!), because their songs have many textures and layers; but it had to be made from simple, natural ingredients, because the instrumentation is mostly acoustic. And we added sunflower seeds because Manitoba is Canada’s largest sunflower seed producer (and they taste good). Check out the video below; obviously quite perfect for ringing in November.

END_OF_DOCUMENT_TOKEN_TO_BE_REPLACED 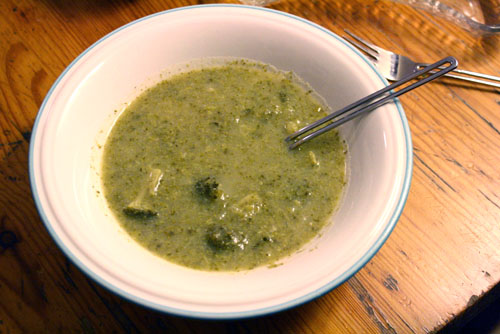 I’ve said it before, but what I miss most about the Midwest in the fall is apple orchards and cider mills. I remember school apple-picking field trips as far back as preschool (the photo to the right is of my sister circa 1991-92): taking a tractor-pulled wagon ride through the orchard, getting dropped off near sectioned-off area for different varieties of apples, then eating them right off the tree as we filled our bags.

There are a couple songs on Fleet Foxes’ Helplessness Blues with references to apple orchards: In the title track, Robin Pecknold sings, “If I had an orchard I’d work till I’m raw/ If I had an orchard I’d work till I’m sore,” and in “The Shrine/An Argument,” it’s “Apples in the summer are cold and sweet” and later in the song “Green apples hang from my tree/ They belong only to me.” But quite a few parts of the album make me think about my childhood besides just the references to apples. The album opens with, “So now I am older/ Than my mother and father, when they had their daughter/ Now what does that say about me?” And then in the title track, Pecknold sings, “I was raised up believing I was somehow unique/ Like a snowflake distinct among snowflakes, unique in each way you can see/ And now after some thinking I’d say I’d rather be/ A functioning cog in some great machinery, serving something beyond me,” and then he goes on to say he doesn’t know yet what exactly that will be or where he’ll end up. Something like this was mentioned in the recent New York Magazine cover story about today’s 20-somethings — like Pecknold and myself — and I know a ton of us can relate in that we’re all trying to figure out where we’re supposed to be in the world and what our bigger purpose is. We’re remembering that we were always told we’re special and can do big things with our lives, and sometimes realizing that that might mean contributing to a bigger project or cause rather than simply working toward what we want on our own.

So, the food: My best friend Jenni came to visit a couple weeks ago, and even though our plans to actually go apple-picking fell through, we decided to go forward with the apple-themed dinner we’d planned. I wouldn’t say we worked till we were sore, like in the song, but we certainly worked hard: apple-honey challah, salad, apple-pear crisp, and this soup as the main dish. Fleet Foxes are the ultimate fall band, and my falls are typically all soup all the time, so that part was easy. You’re probably thinking broccoli and apple sounds like a strange combination, or assuming that this is a sweet dish — but it’s actually mostly savory and the apples add just a touch of sweetness (and I’d consider most of Fleet Foxes’ music savory, but with sweetness in the harmonies). The apples are roasted in olive oil, thyme, sage, salt and pepper — definitely not your typical cinnamon and nutmeg. And, the soup is vegan since Pecknold is, too.

END_OF_DOCUMENT_TOKEN_TO_BE_REPLACED

Brooklyn duo One Ring Zero — multi-instrumentalists Michael Hearst and Joshua Camp — are known for finding their lyrics in unconventional places. In 2007, they released As Smart As We Are (aka The Author Project), an album with lyrics written by big-name authors like Jonathan Ames, Margaret Atwood and Dave Eggers; last year, they wrote songs about the solar system, and you can probably guess what Hearst’s Songs for Ice Cream Trucks is about.

Their latest, the just-released book/album combo The Recipe Project, was the biggest challenge yet: Take recipes from rockstar chefs like Mario Batali, Michael Symon, David Chang, and Isa Chandra Moskowitz, and put them to music — word for word — in a genre of the chef’s choosing. Among the results are Moskowitz’s recipe for electropop peanut butter brunettes, Tom Colicchio’s R.E.M.-channeling creamless creamed corn and Chris Cosentino’s rap-rock “brains and eggs.” In the book, the recipes are accompanied by interviews with the chefs, as well as essays from notable food writers about their own culinary and musical journeys: A couple of my favorites are Kara Zuaro’s story about a touring Chicago band and pop cake (which I’ve made before!), and Emily Kaiser Thelin’s about being the only girl working in a London kitchen.

I chatted with Hearst about using other people’s words, why he (perhaps surprisingly) doesn’t like recipes, and what happens when you give Mario Batali a cookie.

END_OF_DOCUMENT_TOKEN_TO_BE_REPLACED

Every month or so, I’ll be partnering with one of my favorite local sites, Brooklyn Based, to bring you an exclusive song by a Brooklyn band, recorded at Nadim Issa’s state-of-the-art recording studio in Gowanus, Let ‘Em In Music. Then, I’ll create a recipe with — or inspired by — the featured artist. This month’s mp3 is Lady Lamb the Beekeeper performing Cher’s Phil Spector-produced cover of Bob Dylan’s “All I Really Want To Do” (get the free mp3, watch the video, and read my feature on her here), and here are the apple sandwiches I made with Aly Spaltro, aka Lady Lamb. All photos by Dominick Mastrangelo.

When I first approached Aly Spaltro, aka Lady Lamb the Beekeeper, about cooking with me for ETB/BB Songs, she said, “How do you feel about apple sandwiches? I’ll tell you all about ’em.” When she came to my apartment last month, I learned that her mom had started a blog of random childhood memories, and a recent post had been about sandwiches Aly’s grandfather used to make for her mom: toasted bread with butter, baked apples, honey and cinnamon-sugar. Not only was this perfect for October (because of National Apple Month), but it’s also fitting for Aly’s music, which is perfect for fall and, coincidentally, she happens to mention apples quite a bit. In a lovely song on her record Mammoth Swoon (called “Apple,” of course), she sings, “So suffice to say, if you walked away, I would be a lonely apple,” and she says there’s a song called “You Are The Apple” on her forthcoming LP (read more about that here. “I don’t know what my deal is,” she says. “I just love them. I love the word … I don’t even realize it when I’m writing, I’m just like, ‘Yeah, this makes sense; apple, apple.'”

So, here’s a delicious twist on Aly’s grandpa’s apple sandwiches. These are all veggie, but for meat eaters she recommends adding some turkey to it, too.

END_OF_DOCUMENT_TOKEN_TO_BE_REPLACED 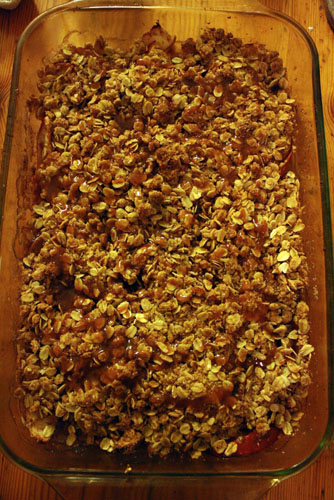 THE PLAYLIST
October is National Apple Month! So, just a warning that most of October’s recipes on here will involve apples. To kick it off, here’s a playlist of some apple songs! You can listen on Spotify here, and the songs are below:

END_OF_DOCUMENT_TOKEN_TO_BE_REPLACED

THE INSPIRATION
When I first heard The National maybe about three years ago, I disliked by frontman Matt Berninger’s voice and wrote them off immediately (and quite unfairly). When I returned to their music last year, around the release of their album High Violet, I finally got hooked and wondered why I was so put off by them in the first place; although since then I’ve certainly acquired a taste for a wider range of voices. Anyway, I spent a lot of time with 2005’s Alligator, which has become my favorite album of theirs. I knew I had to make something based on the song “All the Wine,” partially because, like The National, it took me a few tries to call myself a wine fan, too. (Now, while I still hardly know anything about wine, I do love it and drink it quite often.)

When I saw Smitten Kitchen’s recipe for red wine chocolate cake, I knew it was a perfect match for this band, but I had to take it a step further by not only topping it with Deb’s suggested mascarpone whipped cream, but also with pears cooked in more red wine. The cake itself is dense and rich and one bite goes a long way (the wine flavor does not disappear after baking), while the toppings give it a more complex mix of flavors. It’s similar to how The National’s music can be lyrically dark and sonically layered, but it’s contained and sort of coiled up, rather than exploding in every direction. Not to mention this is decadent and self-indulgent, just like “All the Wine”‘s chorus of “And all the wine is all for me.” Don’t feel bad, though, just indulge in this one. I made it for my dear friend Jena’s birthday because she totally deserves all the wine. It was served at our housewarming party last month, and there were only about two pieces left over.

END_OF_DOCUMENT_TOKEN_TO_BE_REPLACED

Fall is easily my favorite season; likely because I grew up somewhere that actually has a fall (Michigan). New York typically has autumn weather, which we’re finally sort of starting to feel, but it’s definitely not the same as being somewhere with trees that change colors and leave you with a yard full of leaves to rake up and jump in. And going apple picking here is certainly not as easy as it was when I was growing up (my senior year of high school, some friends and I ditched homecoming and instead piled seven of us in my old grandpa car and went to the apple orchard). And I hope you’re prepared for lots of pumpkin, apples and soup on here in the next couple months.

I wrote a few words about five songs, new and old, that are perfect for autumn and my friend Bret Stetka, who writes about food and drinks for Time Out New York, Metromix and MSN.com (he also has a doughnut blog), paired them each with a beer that complements the music and the mood, and explained why they work together. Cheers! (Also check out our spring and summer editions.)