My 2013 music collection has officially been dominated by country albums. (Shhh, don’t tell this to the Warped Tour-going 15-year-old me.) I don’t mean the bros singing about pickup trucks and cowboy boots, or the kind of infuriating garbage that topped the country charts earlier this month. But as someone who loves a wide range of folk and Americana, I guess my dip into the twangier stuff was inevitable. There’s a staggering number of grade-A country albums out this year — I’m using that term sort of broadly, but a few faves (which might show up here later on): Jason Isbell’s Southeastern, Brandy Clark’s 12 Stories, Amanda Shires’s Down Fell the Doves, Ashley Monroe’s Like a Rose… I could go on for a while! But one of the first gals that started the trend for me this year was the 25-year-old Texas native Kacey Musgraves, who’s been touring with the likes of Kenny Chesney and Lady Antebellum and just kicked off a headlining U.S. tour (I saw her at Bowery Ballroom last week — even after playing all those stadium shows she seemed genuinely thrilled to have sold out a show in New York. Loved it!)

On her album Same Trailer Different Park she sings about getting out of small towns, finding the positives in a crappy situation, and loving who you want; at least a couple of themes that aren’t so commonplace in the typically uber-conservative country world (“Follow Your Arrow” encompasses all of this). It’s refreshing!

I wanted her dish to be something round, for the never-ending cyclical pattern of small-town living that finds its way into so many of her songs, especially the first single (and one of the album’s best tracks) “Merry Go ‘Round.” It’s about how girls are expected to be married with two kids by 21, go to church every Sunday, and follow exactly what their parents did, with the absurdly clever chorus of “Mama’s hooked on Mary Kay/ Brother’s hooked on Mary Jane/ Daddy’s hooked on Mary two doors down/ Mary, Mary, quite contrary/ We get bored so we get married/ Just like dust we settle in this town/ On this broken merry go ’round.” Then in “Blowin’ Smoke” she’s singing about waitresses who keep saying they’re going to get out of town, but they’re just “blowin’ smoke” and before they know it their kids are already finishing school. The cornmeal is there because it’s common in a lot of southern dishes, but the texture also fits Musgraves’s music: It’s rough and grainy (and the pancakes are savory) for the “Merry Go ‘Round” line about dust settling, and it represents the tough situations her characters find themselves in. The sweet potatoes are for her Texas roots (her hometown, Golden, has a whole festival for them every year), and the yellow/golden color of the pancakes is for the song “Dandelion,” as well as the summery and autumnal feel her songs give off.

For the topping, the sweetness in the peaches is for the hopefulness in songs like the album opener “Silver Lining,” which is, not surprisingly, about finding the good on a day when you “woke up on the wrong side of rock bottom.” The molasses gives the sauce a sort of smoky flavor (for “Blowin’ Smoke”).

END_OF_DOCUMENT_TOKEN_TO_BE_REPLACED

THE INSPIRATION
I went through a bit of a music drought this year, about a three-month period where I wasn’t blown away by much of anything, and Cat Power’s new album Sun is one that opened the floodgates and got me excited again. It’s emotional and, well, Cat Power-y, but not in the sad way longtime fans expect; and despite the less-depressing words and electronic-tinged music that’s on a different planet from the rest of her catalog, Chan Marshall actually sounds more like herself here. My good friend Amanda (who wrote a fascinating story about her for Pitchfork) said when she went back to listen to her 2006 album The Greatest, she found that Marshall’s voice sounded empty compared to this new one, because she wasn’t totally in it, and she’s right. That album is gorgeous and soulful, but it’s missing some of the “power” that exists on Sun.

It’s all too often that Chan Marshall’s breakdowns and emotional turmoil overshadow her music, but it sounds like she’s mostly in a healthier place here and looking forward; in the title track she sings, “We are free, you and me, we can finally run.” (It’s also worth noting that Sun is wrongfully being billed as a breakup album: The breakup — with actor Giovanni Ribisi — happened after the record was made). In “Real Life” she sings, “Real life is ordinary/ Sometimes you don’t want to live/ Sometimes you gotta do what you don’t want to/ To get away with an unordinary life” and in the 11-minute-long “Nothing But Time,” she sings to Ribisi’s teenage daughter about being young and wanting to be somebody (“I see you, kid, alone in your room/ You got the weight on your mind you’re just tryin’ to get by/ Your world is just beginning/ And I know this life seems neverending/ But you’ve got nothin’ but time/ And it ain’t got nothin’ on you”).

So, for the food — most of the reason for this pie (or quiche, or whatever you want to call it) is because it’s bright, yellow and looks like a sun (thanks to polenta, yellow summer squash, corn, tomatoes and baked eggs); but it’s also a healthy and well-balanced dish because Sun seems to find Marshall in a healthier place than in the past. And sort of on that same note, the onions in it start out spicy, but they mellow out and sweeten as they’re cooked. This is definitely a labor-intensive dish, but so was Sun, which Marshall wrote and recorded completely on her own (I didn’t do that much; I had a little bit of help in the kitchen!). The music has the perfect energy level for a lowkey Sunday morning; instead of wanting to hide under the covers and cry, Sun makes me want to get out of bed and start the day.

END_OF_DOCUMENT_TOKEN_TO_BE_REPLACED 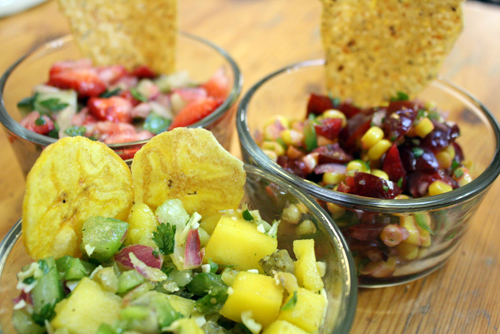 THE DISH
Three salsas, one each inspired by Madonna, M.I.A. and Nicki Minaj

THE INSPIRATION
So, last night Madonna performed the Super Bowl halftime show, with help from M.I.A. and Nicki Minaj on her new song “Give Me All Your Luvin’.” I’m not crazy about the song (the chorus sorta makes me want to rip my hair out, to be honest, although I would appreciate it at least a little bit otherwise), but it was awesome to see these three super-powerful ladies sharing the stage for something this huge. And, of course, it was even more awesome to see M.I.A. flip off national television.

Anyway, my friend Eleanor encouraged themed dishes for her lovely Super Bowl party, which I obviously took as an assignment. So, I made three salsas (an easy choice for the Super Bowl), one each inspired by Madonna, M.I.A. and Nicki Minaj. They’re all are quite different but have the same premise: all three of these women have a nice side, but they’re also extremely bold and have a lot of attitude. So, each salsa has a sweet component and a bit of a kick, and they’re all colorful for the women’s colorful wardrobes and uh, colorful language. M.I.A. is mango and pickles for her song “Mango Pickle Down River” (along with shredded coconut, cumin and curry which are used in Sri Lankan cooking, served with plantain chips because of her “Banana” skit at the beginning of Arular). Nicki Minaj has a base of strawberries for her Pink Friday album (with serrano peppers for the kick). Madonna’s is mostly corn and cherries for her Midwest (Michigan!) roots, which she mentioned at least a couple times in a press conference this weekend.

END_OF_DOCUMENT_TOKEN_TO_BE_REPLACED 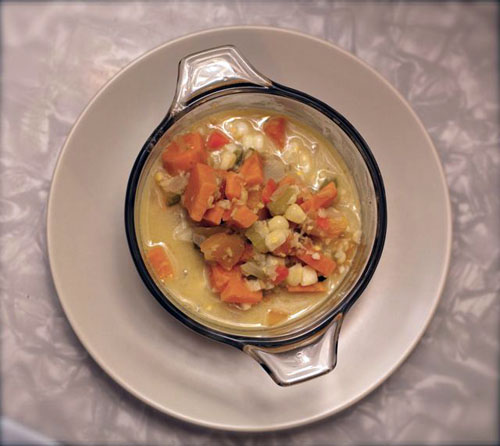 THE INSPIRATION
One of my favorite musical discoveries last year was Lost in the Trees, a classical-inspired folk group from North Carolina. Their most recent album All Alone in an Empty House is sad and beautiful, telling the somewhat autobiographical story of frontman Ari Picker’s family. There’s death, fighting, pain and depression, but also hope. It’s a warm, comforting album perfect for fall, and perfect for healing (this, perhaps unsurprisingly, is likely going to be a theme with most fall music featured here). In the album’s centerpiece, “Fireplace,” the shouted chorus goes, “So surround yourself with good people/ I know it’s painful but we can stand.”

I chose soup because, well, as far as I’m concerned, soup heals everything. But it’s also an ideal dish for big gatherings/communal eating in general: sharing with other people and being together in both good and not-so-good times. As for the flavor, the sweet potatoes and corn are for the band’s southern roots and comfort food in general. (Sidenote: While thinking about corn, autumn, and being “lost in” anything, I couldn’t help but remember the time my cousin and I got lost in a cornfield in northern Michigan when we were toddlers.)

This is easily one of my favorite soups I have ever made; it’s sweet and savory, and can be eaten warm or cold (I prefer it warm, but a friend at work loved it cold). However you eat it, though, I can tell you this stuff was amazing. I said soup is great for sharing, and this one was tasted by my roommates, my friend Amy (who took the accompanying photos), and three coworkers — and they all approved. This soup requires quite a bit of veggie prep work, but it’s well worth it, I promise.