THE INSPIRATION
So, the Beach Boys’ Smile came out last week… Kind of a big deal! (I recommend reading this if you don’t know the story behind it.) There’s a fun little song on there called “Vege-Tables,” and — a little bit of trivia — some of the “percussion” in it is made by Paul McCartney chewing celery. So, I made one of my childhood favorites (OK, I still pack this in my lunch sometimes), the delightful snack known as ants on a log: celery sticks for the same crunch in the song, topped with sunflower butter and sweet golden raisins for the Beach Boys’ infamous California harmonies.

I couldn’t find the version of “Vege-Tables” from The Smile Sessions, but you should be able to listen to it on Spotify here.

END_OF_DOCUMENT_TOKEN_TO_BE_REPLACED 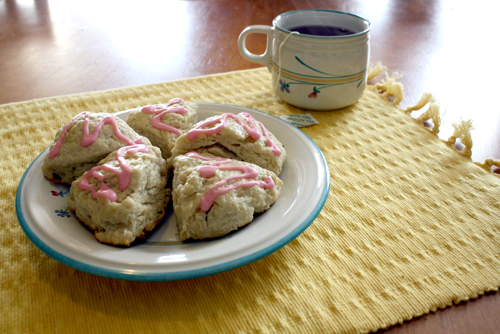 Their LP is called Teatime Favourites, so I made scones — a perfect treat for a cup of tea — with rosewater icing, which I thought would be a pretty and dainty complement to the scones, but it actually tasted more like a mix of bubblegum and soap (the scones were great, though!). Turns out I am not a fan of rosewater!
Betty & the Werewolves on MySpace
END_OF_DOCUMENT_TOKEN_TO_BE_REPLACED

When Carlye Wisel and Donald Rasmussen moved to New York from Chicago, they brought with them a seven-foot-long yellow couch, and it eventually became a place where bands came to play acoustic sets in their Brooklyn apartment, which are then filmed for their blog, Big Ugly Yellow Couch. Since then, the couch has gone through a horrendous building fire and a couple of apartments, but the site is still up and running, with videos of up-and-coming bands like Phantogram, Oh Land, and one of my faves, Yellow Ostrich.

It might not be obvious from looking at the site, but food actually plays a significant role in BUYC: When setting up the sessions, Carlye asks the bands for their favorite snacks, and does her best to have them ready when they get there. She’s also constantly blogging/Tweeting about food, and I’m constantly impressed by her eating abilities (and all of my friends’ eating abilities, for that matter!).

Carlye chatted with me about cooking music, kitchen design, and gluten-free snacking.

END_OF_DOCUMENT_TOKEN_TO_BE_REPLACED

THE DISH
Healthy-ish DIY Dunkaroos (recipe at bottom of post)

THE INSPIRATION
Breathe Owl Breathe are magical. I’m still kicking myself for not having gotten into them when I was living in Michigan (they’re from there, too), but it’s definitely better late than never. They’re an inventive, whimsical folk trio that sings about love, fear and humanity, disguised as stories about dragons, lions and various other creatures. I chose this recipe because, just like their music, it’s something that’s kid-friendly but it’s just as rewarding for the grown-ups, too. (The band also just used Kickstarter to fund a children’s book and record.)

On their phenomenal LP Magic Central (one of my favorites of last year), the song “Dragon” is, on the surface, about a dragon and a princess who are pen pals, but the princess doesn’t know the dragon is a dragon because he has good handwriting. But beyond that, it’s a song about loving someone that other people don’t think you should love, even though their hearts are in the right place. So these treats are also fitting because kids will love them (c’mon, they’re animal crackers!), but they’re actually pretty healthy, thanks to whole wheat flour, flax seeds, and raw sugar. The frosting isn’t quite as healthy (lots of powdered sugar), but still uses low-fat cream cheese and plain low-fat yogurt instead of butter, so it’s at least a step up from typical frosting. And, unrelated to the band, apparently February is National Snack Food Month!
Breathe Owl Breathe on MySpace