THE INSPIRATION
Norwegian rock singer Ida Maria’s songs are typically about drinking booze, being heartbroken, kicking ass, and getting it on. Her first album, Fortress Round My Heart (home to the song “I Like You So Much Better When You’re Naked”), soundtracked my summer between college and moving to New York, so a couple months ago my mind was blown when I learned she had already released LP No. 2, Katla, in Norway late last year, and I didn’t already know about it. It’s finally out in the U.S. tomorrow (June 7) and it’s fantastic.

I teamed up with Missy and Mariel, the lovely ladies of What We Wore To Work Today (who are just as sassy as Ms. Maria) to make a dish based on her song “I Eat Boys Like You For Breakfast,” in which Ida shuns a dude for pissing off her dog, insulting her mother, groping her sister and crapping on her father (!!). We made a frittata served on a sandwich with smoked salmon (a nod to her Norwegian roots) and a side of potatoes, and it uses all the foods she mentions in the song: tomatoes, potatoes, onions, oregano, basil, thyme and hot sauce. It’s also linked to Katla‘s super-fun and sorta-raunchy first single, “Cherry Red,” with the cherry tomatoes and Mariel’s lipstick in the photo.
Ida Maria on MySpace

END_OF_DOCUMENT_TOKEN_TO_BE_REPLACED 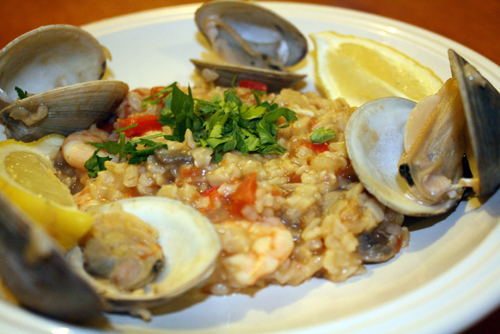 THE DISH
Paella with shrimp and clams (recipe here)

THE INSPIRATION
Shannon and the Clams’ new record Sleep Talk has been a recent favorite around the eMusic office, and the band instantly came to mind during a going-away dinner for a coworker a few weeks ago. We were at a delicious tapas restaurant and the dish was a seafood paella with shrimp, monkfish, mussels and, of course, clams, and it was delicious. The rice was dirty (in the way that a rice dish can be “dirty,” as in it wasn’t white), and so is the band — their music mixes trashy lo-fi with hints of girl-group pop, fronted by powerhouse bassist/vocalist Shannon Shaw. (You might recognize her and the rest of the group as Hunx and his Punx’s “Punkettes.”) They also have a song called “King of the Sea.” Done and done.
Shannon and the Clams on MySpace

END_OF_DOCUMENT_TOKEN_TO_BE_REPLACED

THE DISH
Six variations of butter-, cheese-, and jelly-less toasts (recipe + close-ups at the bottom)

THE INSPIRATION
See the lyrics above; pretty self-explanatory!

ABOUT THE ARTIST
Do I really need to tell you about the Flaming Lips? If so, you should probably just read this.

ABOUT INDIE ROCK DELI
It all started here, with a normal day at work that turned into an hours-long giggle fit. Indie Rock Deli dishes are inspired by punny takes on band names and song titles. Leave your own suggestions in the comments and they might be used in a future post! (No, they definitely don’t have to actually be indie rock.)