THE INSPIRATION
Joni Mitchell will forever be one of my all-time favorite artists, and while there is always at least one song of hers that’s fitting for any given season or mood, I associate her most closely with fall and winter (and not only because of the song “River”). In “Urge for Going,” a song she wrote in 1966, she sings about the year’s first frost swallowing up the summer (“I awoke today and found the frost perched on the town/ It hovered in a frozen sky and it gobbled summer down”).

It’s sorta perfect for New York’s weather right now, since we’ve had small tastes of winter throughout the last couple weeks, and now we have what I expect is our final run of nice weather before winter swallows it up for good. And when that happens, I’ll want to crawl under my covers and escape. But since I won’t actually be able to do that (I’m going to Chicago next month; certainly not a warm-weather getaway), sitting at home with a warm bowl of soup and a grilled cheese sandwich will have to serve as my “escape” for now, or at least my way to make the weather more bearable. In college, my friend Julie and I would stop at The Dairy Store for lunch in between classes, which was particularly rewarding in the winter: On Mondays we could get a grilled cheese sandwich and tomato soup for just $2.10, and it instantly made us forget about the slush we had just trekked through.

END_OF_DOCUMENT_TOKEN_TO_BE_REPLACED

THE INSPIRATION
Toronto band the Wilderness of Manitoba make lovely folk music based on hushed harmonies and lush, organic arrangements. Their album When You Left The Fire was made for this time of year: They mention breezy nights (“Orono Park”), devils dancing in the trees (“November”), and crashing waves (“White Water”). There’s also a song called “Golden Beets,” so I wanted to make a dish centered around those lovely beets that do not make a big, fuchsia-colored mess. It needed to be hearty and have a lot of components (kale! pomegranate seeds! apples!), because their songs have many textures and layers; but it had to be made from simple, natural ingredients, because the instrumentation is mostly acoustic. And we added sunflower seeds because Manitoba is Canada’s largest sunflower seed producer (and they taste good). Check out the video below; obviously quite perfect for ringing in November.

END_OF_DOCUMENT_TOKEN_TO_BE_REPLACED

Confession: I made this dish a couple weeks ago, one of the last posts conceived in my old kitchen, because I moved last weekend! Apologies for the lack of posts in the last couple weeks — between traveling to Michigan for my cousin’s wedding, packing up my apartment and moving, and my 17-year-old brother coming to visit this weekend, blogging has sort of taken a backseat (but not for long, I promise!).

THE DISH
Simple tomato gazpacho (recipe at the bottom)

THE INSPIRATION
It has been hotter than hell in the city, which has made the thought of cooking quite unappealing. Standing over a stove or in front of an oven? In a sauna? No, thank you. (OK, so I’ve still had to do it a bit anyway; but it’s awful.) So I made gazpacho, cold soup that doesn’t require any cooking. To go with it, check out a few summery songs I’ve heard recently — maybe they’ll make you forget about the heat for a little while?

END_OF_DOCUMENT_TOKEN_TO_BE_REPLACED 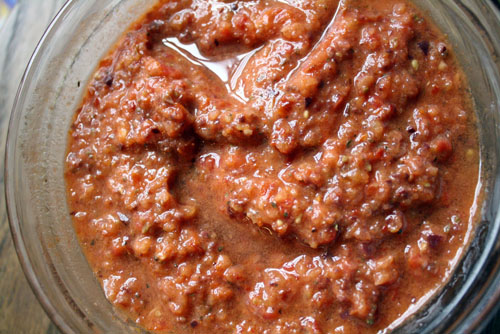 THE INSPIRATION
I recently learned that a few years ago, Jonsi Birgisson from Sigur Ros made a cookbook with his partner Alex Somers; all raw, vegan dishes that they called their “Good Heart Recipe Book,” along with several cooking videos. Jonsi released his first solo album, Go, last year, and I loved it because it’s light and colorful, with lots of layers and textures, but it doesn’t feel too over-produced or synthetic. Every recipe in Jonsi and Alex’s whole “book” (available as a PDF) is the same way — different colors that come from foods in their natural form, but assembled in ways that create different textures. I chose one of the recipes from the book — the “sundried good heart tomato sauce” — and while I realized I overestimated my fondness of sun-dried tomatoes (as in, I thought I liked them more than I actually do), it was still tasty. My friends and I ate it with pasta and veggies; although I guess maybe we should have kept things raw to keep in line with the book, but oh well.

END_OF_DOCUMENT_TOKEN_TO_BE_REPLACED

THE INSPIRATION
A couple weeks ago my lovely friend Jill took me to see Jolie Holland at Bowery Ballroom, and she said we needed to get there early to see Sallie Ford and the Sound Outside. Holy whoa was she awesome, and I listened to Ford’s music nonstop for the rest of the week. Of course, the song that really made my ears perk up was a new one called “Fried Green Tomatoes,” which isn’t on her album but was recorded for her Daytrotter session last month (download “Fried Green Tomatoes” and three other tracks there!).

Ford’s voice — a brassy, spastic alto wail — falls somewhere between Etta James and Amy Winehouse. Her LP is called Dirty Radio, and she sings about the fake music being made today. It’s no wonder that most of her record — folk, blues, jazz, rock — sounds like it could’ve been recorded decades ago. The dish I made is also inspired by one of my favorite Brooklyn restaurants, Lodge in Williamsburg, whose rustic interior of tree-stump stools and the adjacent “General Store” also looks like it came from another time. My favorite dish there is the egg sandwich, with a fried egg, pesto, tempeh bacon and a fried tomato. Sallie Ford’s music is hearty, and instead of an egg I made a high-protein veggie burger topped with a fried green tomato; instead of the pesto and bacon I just finished it with normal burger fixins, and it was perfect.