“As soon as you’re used to one season it moves/
And that’s all that you can count on.”
— “Cabin Fever” by Casey Dienel (from 2006’s Wind-Up Canary)

THE INSPIRATION
You know the awkward time between between fall and winter, usually in November-ish, when you’ve had two weeks of scarves and winter coats, then all of a sudden there are a few days when it’s 50 degrees and sunny and you can get away with just a sweatshirt? Or between winter and spring, when you think the snow has finally disappeared for the year and then BAM! Another snowstorm hits and, despite the fact that it’s mid-March, you’re suddenly convinced that winter won’t end for another six weeks? Casey Dienel’s song “Cabin Fever” sums that up perfectly, as she personifies autumn as an old man with tattered clothes, and sings about Indian summers, wearing sweaters, and getting out of town.

The cupcakes were inspired by changing seasons and new beginnings: The pumpkin and apple are obvious fall flavors, the champagne is a nod to Dienel’s lyric about toasting the end of a season, and I wanted the frosting to look at least a little bit like snow. Since I made these for a New Year’s Eve party, the champagne was even more fitting to represent new beginnings. And hey, it’s also the first post on here, so cheers to that, too!

ABOUT THE ARTIST
Before she started performing as White Hinterland, Casey Dienel released Wind-Up Canary, a quirky piano-pop record that I bought on a whim about four years ago. Her first album as White Hinterland, 2008’s Phylactery Factory, was still rooted in piano, but WH’s 2010 LP, Kairos, took more cues from R&B than Regina Spektor. It should also be noted that Casey has a really wonderful food blog, Hungry Oyster — maybe I can convince her to come over and cook with me next time she’s in town?
White Hinterland on MySpace

The cupcakes (adapted from Williams-Sonoma)
Makes about 30 cupcakes.

Directions:
• Preheat oven to 350 degrees.
• In a medium bowl, sift together dry ingredients (flour through salt). Stir in chopped apples.

• In a large bowl, whisk together everything from the pumpkin through canola oil.

• Add and whisk in eggs one at a time.

• Gradually add the dry mixture to the wet mixture, mixing with a wooden spoon. 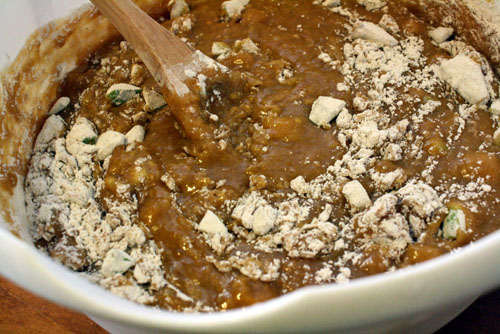 • Fill muffin cups about 3/4 full and bake 20-25 minutes, until a toothpick stuck in the middle pulls out clean. The cupcakes I had in the lower rack of my oven took 20, and the top rack was closer to 25. 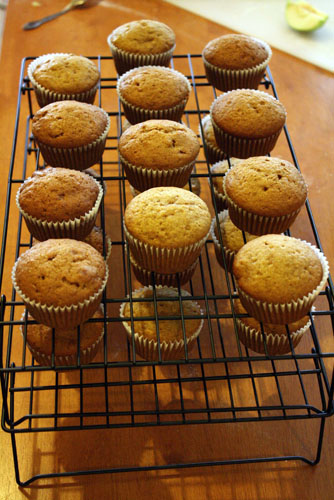 Ingredients:
2 c champagne (I used Prosecco, so, not technically champagne, but I think any sparkling wine would work with this; or even sparkling cider if you want to leave out the alcohol)
1 c powdered sugar

• Bring the champagne and powdered sugar to a boil, then reduce the heat and simmer until sugar is dissolved. It will be a very thin liquid.

• Use a toothpick or fork to poke holes in the cupcakes, then drizzle the syrup on top of the cupcakes. Let the cupcake soak up the syrup and do at least three or four rounds of drizzling. I know it sounds like this might make the cupcakes soggy, but I did two rounds of it and it was moist but not soggy, and I actually didn’t get as much of the champagne flavor as I had hoped! This was also the messiest part of the cupcakes, and I’m not sure what the cleanest/easiest method is to this – I tried with both a spoon and a squeeze bottle, and I think the spoon was a little neater, but still not perfect.

• Beat together the butter and powdered sugar. Add champagne to taste, a couple tablespoons at a time. I used about eight tablespoons in total, but do it to your liking. You may have to add more powdered sugar to balance out the liquid. Important thing I learned about buttercream frosting: Make it right before you are going to use it — do NOT make it ahead of time and put it in the refrigerator before you frost the cupcakes!!! 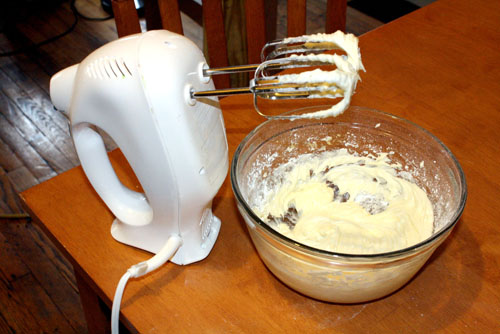 • Pipe or spread the frosting onto the cupcakes.

Leave a Reply to Follow this Foodie: Eleanor Whitney of 2 Cooks in the Kitchen and Corita | Eating the Beats Cancel reply