It kinda blows my mind that Lorde’s “Royals” is the No. 1 song in the country. Not because it isn’t amazing (it is!) and it’s certainly not surprising that it’s popular, but it’s so not in the same world as everyone charting right behind her — Katy Perry, Miley Cyrus, Drake. Lorde (16-year-old Ella Yelich-O’Connor) herself is so unfazed by everything the pop-music industry usually stands for, she writes all her own lyrics, and couldn’t care less about being famous; it’s refreshing and rare to find that in a pop artist.

Her whole record, Pure Heroine, is amazing, and amazingly smart: O’Connor writes about adolesence and growing up in a way that’s relatable, even for those of us who are a decade or more past her, and she does it without being cheesy or contrived. In a recent interview with the Guardian, she said, “I’m like the most terrible person to go to a party with in the world, because I just can’t enjoy it. I’m just thinking all the time about what it means and what the implications are. So everybody’s getting fucked up and I just can’t give myself over to it, because I’m thinking about…the archetypes of being a teen. I’m really interested in kind of weird social situations and cliques, watching girls vying for attention, watching how the popularity thing happens. I’ve always thought way too hard about everything.” I’m usually so pessimistic about today’s teenagers, and then there are gals like this (and Tavi Gevinson, and everyone who was at her incredible Rookie Magazine party and talent show in Brooklyn a few weeks ago) who remind me that it’s not all bad out there and restore my faith in humanity.

Aaaand, on to the food: A lot of the backing music on Pure Heroine uses rippling, swirly electronics, so the thinly sliced eggplant, and the pieces of it being rolled into spirals, represents that, as well as the layered vocals in most of the songs. The eggplant is also for her music’s darkness; I think of cool colors like purple, blue and gray. The filling has curly kale in it — because Lorde has the best. hair. ever. and also because it’s known as being trendy and high-brow, but in reality kale has been around forever and is easy for any common person to find or afford; kinda like in “Royals” where she and her friends are pretending to be fancy, even when they don’t come from money and only dream about it. The lemon, which comes through really brightly here, is for the boldness in O’Connor’s lyrics — she sings about chasing dreams and, like Kacey Musgraves in last month’s post, living in a small town (“We live in cities you’ll never see on a screen,” she sings in “Team”). And its acidity is for her sarcasm: The line, “I’m kinda over getting told to throw my hands up in the air/ So there” in “Team” kills me every time, and there’s “It’s a new artform showing people how little we care” in “Tennis Court.” Overall it’s a comforting dish, which is for the reassurement that comes from banding together while going through the sometimes-B.S. that is growing up — which happens even when you’re well out of high school.

The recipe
Adapted from Bon Appetit and Real Simple. Serves 6. 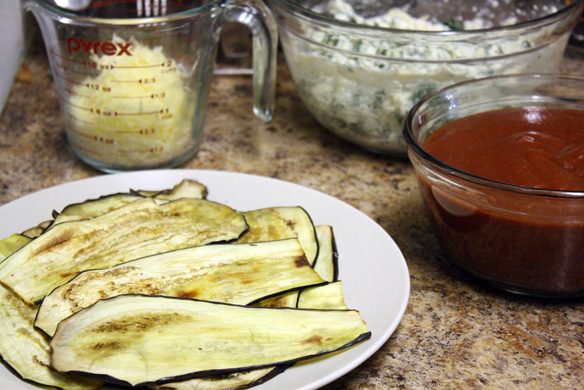 Heat oven to 450 degrees Fahrenheit. Line two colanders (each on top of a bowl) with a layer of eggplant slices. Sprinkle liberally with salt, then add another layer of eggplant. Repeat until all eggplant is layered. Let sit to drain for 30-60 minutes. Pat eggplant dry with paper towel and place one layer on a baking sheet lined with either parchment paper or a silicone baking mat (you can also use foil, but make sure to thoroughly oil it or the eggplant will stick). Brush tops of eggplant with olive oil. Bake for about 5 minutes on each side. Stack on plate to cool. Turn the oven down to 350 degrees Fahrenheit.

For the kale: Remove stems and rinse. Bring a pot of water to a boil, add the kale and cook for about 2 minutes, until tender. Drain and rinse with cold water. Get as much water out as you can; use a potato ricer or squeeze with your hands and pat dry with a paper towel. Chop into small pieces.

For the filling: Whisk the eggs in a bowl. Add ricotta, 1 cup of shredded cheese, the lemon zest, a pinch of salt and 1/2 teaspoon of pepper and mix. Mix in the kale.

To assemble: Spread one cup of tomato sauce across the bottom of a 13×9 glass baking dish. Scoop about 2 tablespoons of the filling and place at the fat end of a piece of eggplant, then roll up and set in the backing dish with the seam side down. Repeat until all filling is used (about 25 eggplant slices). Spread the rest of the tomato sauce across the rolls, then sprinkle the rest of the cheese on top. 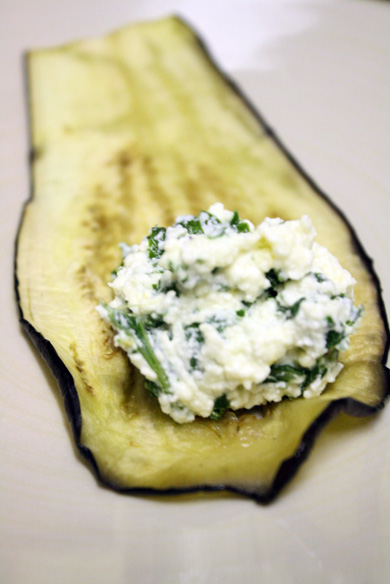