THE INSPIRATION
There is no man in the band Mountain Man; it’s actually a trio of three ladies — Molly Erin Sarle, Alexandra Sauser-Monnig and Amelia Randall Meath — who sing gorgeous, hushed, often-a cappella harmonies; songs about loons and honeybees and buffalo and chickadees. Go ahead, get lost in these videos of them. It’s also worth noting that they recently did a bunch of shows with Feist… Their music sorta feels like sitting around a campfire by a lake, and honeycomb fits it well because this old-fashioned treat is just as light, airy and sweet as their voices; and it’s also known as seafoam, appropriate for an album called Made the Harbor whose cover is a photo of something making a splash in the water. So, just like there’s no man in Mountain Man, there’s no honey in these honeycomb treats — and while the honeycomb itself tastes like burnt marshmallows, there are no marshmallows involved, either. Anyway, dip the honeycomb in chocolate and graham cracker crumbs, and you’ve got a s’more, perfect for listening to Mountain Man and pretending you’re by a campfire on the water.

THE RECIPE
Adapted from Cherrapeno.

• Set out either a silicone mat or a greased cookie sheet.

• In a medium-large saucepan, combine sugar and corn syrup and cook over medium-high heat until it comes to a boil (about a minute or so). Prepare the baking soda and cinnamon while the sugar is boiling. After another 5-6 minutes, the mixture will just barely start to change from translucent to a light amber color. Let it go for about a minute longer, until it gets just slightly darker (watch closely or it will burn).

• Quickly remove from the heat and mix in the baking soda and cinnamon. It’s going to seize up, quite similar to making caramel (this is why you need a large-ish pot! also, I used a whisk, but you should probably use a wooden or silicone spoon). 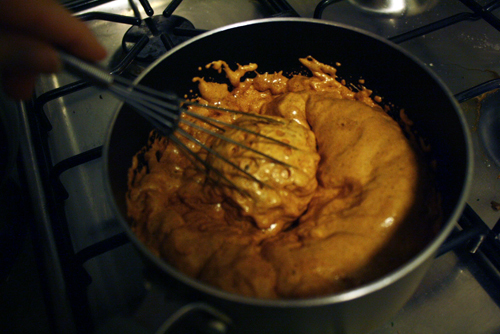 • Pour it out onto the silicone mat or cookie sheet; it’s fine if it’s not evenly spread. Let harden either at room temperature or stick the pan in the freezer to speed it up.

• When it’s hardened, break the honeycomb into pieces (like chocolate bark).

• Melt chocolate chips in the microwave about 30 seconds at a time, or over a double boiler. Dip each piece of honeycomb into the melted chocolate, then the graham cracker crumbs, and set back on the silicone mat or another tray. Let harden. 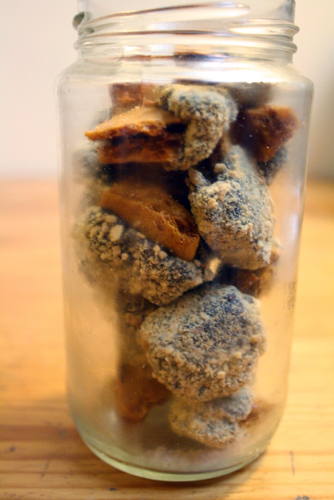