THE INSPIRATION
My dad bought me my first guitar — a tiny, tiny acoustic — when I was about 8 years old. It’s a shame I didn’t learn to play one until a few years later, but he’s the one who made me want to start (he’s been playing since he was 17, and he might kill me if I tell you his age now, so let’s just say it’s been 40+ years). While my mom got me into piano lessons, I think my rock ‘n’ roll tendencies started with my dad. I can remember plenty of trips to various guitar stores in the Metro Detroit area, where I accompanied him as he gradually tweaked and added to his collection (I think he’s got about eight guitars now?).

He took me to get my first real guitar — a “midnight wine”-colored Fender stratocaster, which I bought in eighth grade with bat mitzvah money — and the bass guitar and acoustics that came in the years later, and found me a guitar teacher, a hippie-ish dude who was usually late and told me I would like the Violent Femmes. My dad has always been supportive of my musical endeavors (including the less cool ones, like taking my sister and me to see 98 Degrees at the Michigan State Fair), and much more importantly, he’s always supportive of everything I do. The night before I moved to New York, his toast to my roommate and me was, “To Laura and Mike, and New York: Balls to the wall!” He’s the most supportive, generous, hilarious and genuine person I know, and I wouldn’t be where I am today without him. So thank you, Dad, for being the best. Happy Father’s Day!

This dish is in no way related to guitars, etc., but it’s one of my favorites my dad makes — because, yes, I was blessed with two kitchen-savvy parents. I should also note that my dad is the king of kitchen gadgets (every time I go home there’s some new and weird toy for me to tease him about), and it’s probably a good thing that the spacial restrictions of New York living prevent me from keeping up with him. The best part of this dish is I actually got to make it with my pops, since I was back in Michigan last weekend for my brother’s high school graduation.

THE PLAYLIST
When I think of my dad in relation to music, I think of the Eagles (“Take It Easy” is probably the most-played song on his guitars), The Lovin’ Spoonful (their greatest-hits album got a lot of airtime in his car when I was growing up) and Fleetwood Mac (we went to see them together a couple years ago!). But I left this list up to him, so here you go! It is Dad Rock to the core, and I love him for it. (Obviously I couldn’t use the real version of the Beatles’ “With A Little Help From My Friends.”)

THE RECIPE
This dish is actually sorta magic, in that it doesn’t use (or need) any spices, salt, garlic, etc. — it’s just perfect on its own. It’s great for any meal, and it’s just as good right out of the oven as it is cold. Not to mention it’s super healthy. Also, if you don’t like cottage cheese, don’t be put off by the fact that it’s in this recipe; I’m not a big fan of it either, but you can’t actually taste it.

2 10-ounce boxes of frozen spinach, thawed in the fridge overnight (don’t do it in the microwave if you can help it; it doesn’t turn out the same)
1 cup chopped scallions
3/4 cup low-fat cottage cheese
1 cup shredded cheddar cheese, plus a little extra (optional) to sprinkle on top
2 eggs

• Cut off the top of the boxes of spinach and use your hands to squeeze out as much liquid as you can while it’s still in the box. Let sit in the boxes or over a paper towel–lined strainer for half an hour. 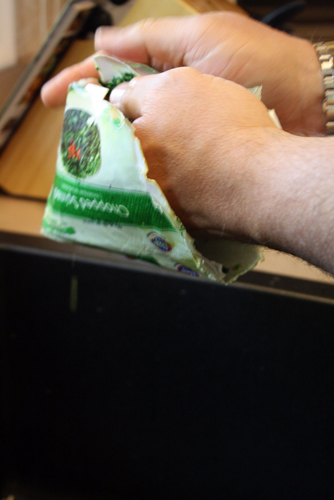 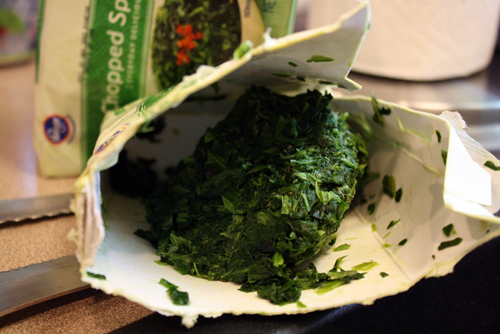 • Finish draining using a potato ricer. If you don’t have one of those (I swear, the only reason I have one is to make this dish), set spinach in a strainer and press down with paper towels. I can’t stress how important it is to get all the liquid out of the spinach in this. 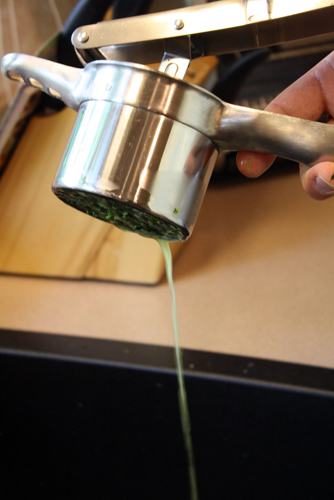 • Mix the cottage cheese, cheddar cheese and scallions in with the spinach.

• Spread into an 8-inch baking dish (or two smaller dishes) and sprinkle shredded cheese on top. 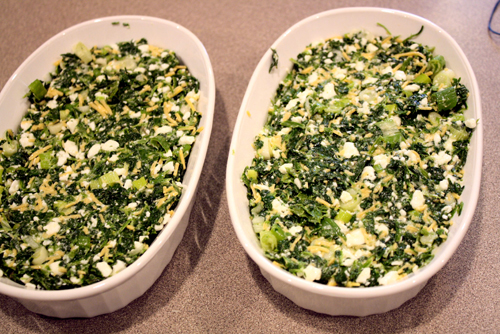 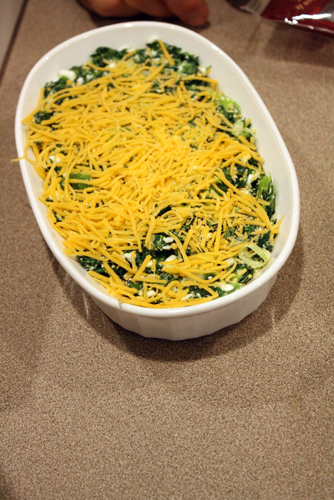 • Bake for about 40 minutes, or until the edges are crusty.

16 thoughts on “Cheesy Spinach Bake, and a Dad Rock playlist from my dad”