THE INSPIRATION
When it’s as hot as it is in New York this week (in the 80s and 90s, aka I AM MELTING IN MY APARTMENT AS I WRITE THIS), the only thing I can think about is watermelon. And now, I can assure you, the only thing I will ever think about during times like this is this drink. It’s inspired by the Brooklyn band Beach Fossils, whose music is equally fit for this weather; they’ve recently become my start-of-summer soundtrack. Their music is breezy and drenched in reverb, and while the songs have plenty of pep and energy, they never seem to be in too much of a hurry, which is exactly how I like to be in the summer. In their song “Lazy Day,” from last year’s self-titled debut, frontman Dustin Payseur sings, “Lazy today, lazy tonight and later on/ All we had to do was nothing at all, under the sun.” Sounds about right to me. Their recent record, What A Pleasure, isn’t as explicitly about the laziness of summer, but still has the same feeling. What a pleasure, indeed.
Beach Fossils on MySpace

8 lemons (including one for garnish)
3 limes
1 cup sugar
4 cups water, divided
4 cups cubed seedless watermelon, frozen for at least two hours (It’s fine if it still has the white seeds. [Edit: I froze the watermelon to give it a slushy consistency, but you don’t have to freeze it.])
About 5 large basil leaves, roughly chopped (can add more)
About 5-10 mint leaves, roughly chopped (can add more)
Ice

To give it an extra kick: Adding booze is, obviously, always an option. Some kind of fizz wouldn’t be so bad, either.

• Make a simple syrup by combining 1 cup of water with 1 cup of sugar over medium heat, until the sugar is dissolved. Keep in the fridge until ready to use.

• Juice the lemons and limes (together there should be about 1 1/4 to 1 1/2 cups of liquid), either over a strainer, or into a bowl or measuring cup and then pour through a strainer to catch seed. (You don’t need a juicer for this — I did it all by hand.) Add to your pitcher. Then add three cups of water.

• Add the simple syrup and ice. 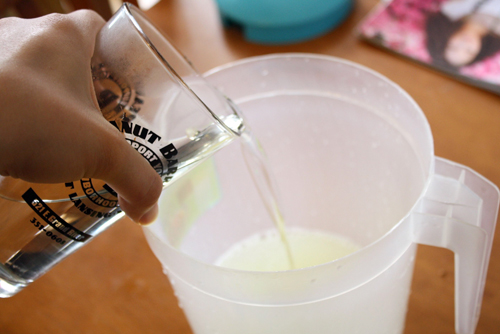 • In a food processor, pulse the watermelon with the basil and mint (I did it in two batches) until it has a slushy consistency and most of the large chunks are gone. Add to the pitcher.

• Garnish with lemon or lime slices.