Every month or so, I partner with one of my favorite local sites, Brooklyn Based, to bring you an exclusive song by a Brooklyn band, recorded at Nadim Issa’s state-of-the-art recording studio in Gowanus, Let ‘Em In Music. Then, I create a recipe with — or inspired by — the featured artist. This month’s mp3 is The Loom, performing their previously unreleased track “The Devil You Know” (get the free mp3 and read my feature on them here), and here is the stuffed acorn squash I made with the band. All photos by Evan Daniels.

I’m excited that we were able to time this post with Thanksgiving, because the Loom’s music is perfect for sitting around a big table with friends, and so is this dish. I first heard the Brooklyn-based folk-rock band last year, and it was their communal energy — shared vocals, two bandmembers playing percussion, and a song about having all your friends over to watch fireworks — that drew me to their music. Their songs are also very autumnal, with plenty lines that mention the changing of the seasons (there’s a gorgeous song on the band’s debut LP, Teeth, called “The First Freeze”). So when the band — John Fanning (guitar, vocals), Sarah Renfro (keyboard, vocals, percussion), Lis Rubard (trumpet, French horn), Dan DeSloover (bass, vocals) and Jon Alvarez (drums, vocals) — took over my kitchen last month, I wanted our meal to reflected that. We roasted acorn squash halves and used them as a bowl for a mix of veggies and wild rice (OK, technically it wasn’t “wild rice,” but the closest I could find at Trader Joe’s), and chowed down.

At least a few of the bandmembers are avid cooks: When they got together to hear the test-pressing of Teeth, Lis made baked eggs over portabella mushrooms and tomatoes, with waffles, and pimento cheese; Jon told me about how he learned how to can tomatoes after working on a farm for a summer.

• Heat oven to 450 degrees Fahrenheit. Place acorn squash halves in baking dishes, flesh side up, and roast until tender (about 40-45 minutes). Optional: Add a pat of butter to each squash half. 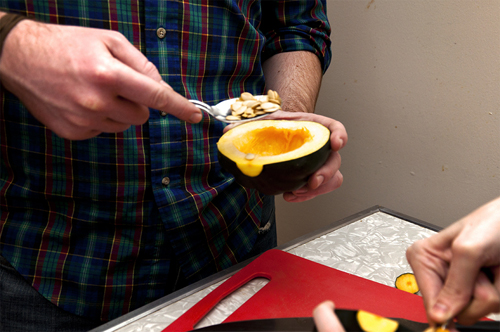 • Combine rice and vegetable broth (or water + boullion cubes) in a large pot. Cover and bring to a boil, then bring down to a simmer.

• When about half the water/broth is absorbed (about 20 minutes?), add garlic, onions, carrots and celery and stir. Cover and cook for another 10 minutes. Stir in mushrooms, tomatoes and spinach. Cook, uncovered, until liquid is absorbed and vegetables are tender.

• Scoop rice and veggies into squash “bowls” and serve warm.

2 thoughts on “Stuffed Acorn Squash with The Loom”