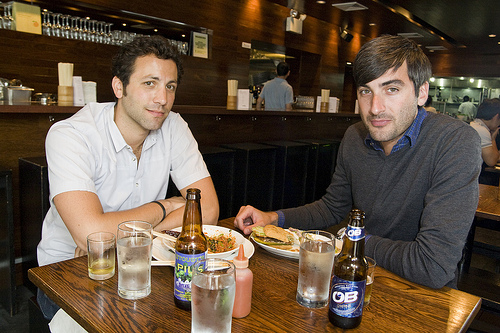 Working in the music biz sometimes means eating out a lot — whether it’s meetings with others in the industry or taking artists out before their shows. Andrew Steinthal and Chris Stang are the music-industry dudes behind the NYC restaurant reviews site Immaculate Infatuation. (Steinthal does publicity at Warner Bros. and Stang is the director of marketing at Atlantic Records.) The site is great for anyone in the city looking for a new restaurant, but it’s especially awesome for those wanting to grab a bite before checking out a show: You can search reviews by neighborhood or cuisine, but you can also check what restaurants are closest to the music venue you’re headed to.

ON THE WEB
Immaculate Infatuation
@ImmaculateInfat

I chatted with the guys about where their site’s name comes from, where to eat on Valentine’s Day, and what music you should be listening to right now.

WHY ‘IMMACULATE INFATUATION’?
Steinthal: “When I was in college, a bunch of my friends and I dressed up as a fake, amazing British rock band, and we called ourselves Immaculate Infatuation. I was Roger Wexler, we had a drummer named Robbie Love, a lead singer named Meticulous — it was quite a rock band. So Immaculate Infatuation made quite an impact on the college campus…We were kind of a big deal. And we just liked the name after that, and when we were trying to figure out what to call our website, we tossed things around that kind of had to do with music and food: Eats Beat was something we had seriously considered, because it was the eats and the beats. So I think we just kinda decided that we just didn’t want to be another one of the food blogs; we just might as well roll with a name we thought was ridiculous.”

Stang: “We just wanted to make it as difficult to remember and type in on the internet as possible.”

NEW YORK RESTAURANTS OR BARS WITH THE BEST MUSIC?
Stang: “I was at the kin shop last night and everyone was commenting on how good the playlist was. And all of the Momofukus.”

Steinthal: “David Chang [of Momofuku] has good taste. Chang LOVES music and he’s really into a lot of good bands. He does a good job with his music.”

DO EITHER OF YOU COOK AT HOME AT ALL?
Steinthal: “I’d say we both cooked a lot more at home before we had this website. Now it’s like every night we need to be eating out somewhere. But I make a really good chicken stirfry with honey mustard.”

ANY KITCHEN DISASTERS?
Stang: “It’s not necessarily a kitchen disaster, but I can tell you, I’m a decent cook but I cannot make a pancake to save my life. Honestly, I might as well be making a soufflé or something, ’cause that just doesn’t work.”

FAVORITE FOOD TWEETERS?
Stang: Mark Bittman (@bittman), Aziz Ansari (@azizansari)
Steinthal: “Sarma from Pure Food & Wine (@sarma), one of the most entertaining and ridiculous people on Twitter. She has no Twitter filter.”

FAVORITE MUSIC TWEETERS?
Stang: “Does Miss Info (@MISSINFO) count as a music person? She does both the foods and the musics. The eats and the beats.”
Steinthal: Wiz Khalifa (@RealWizKhalifa)