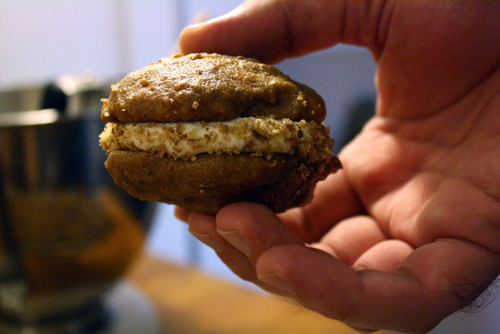 Earlier this year, my friend Daphne Carr launched a Kickstarter project to publish the Best Music Writing book series independently, through her new music-focused press Feedback Press. (BMW is an anthology of the year’s best conversation about music, in the form of features, essays, reviews, blog posts, etc.) One of the pledge options toward the project’s $15,000 goal was for me to bake treats inspired by the artist or song of the backer’s choice, and this was the first of the two purchased, inspired by James Taylor’s “Carolina In My Mind.”

THE INSPIRATION
James Taylor grew up in North Carolina and he wrote his hit song “Carolina In My Mind” when he was homesick overseas. I chose sweet potatoes because North Carolina is the No. 1 producer of them in the U.S., so they might help with a little bit of homesickness. And while I was brainstorming for this, my aunt unknowingly (via Facebook — thanks, Aunt Linda!) tipped me off to videos of James Taylor baking pecan pies and maple sugaring, so I made the sweet potato whoopie pies, then rolled them in pecans that I candied with maple syrup and brown sugar.