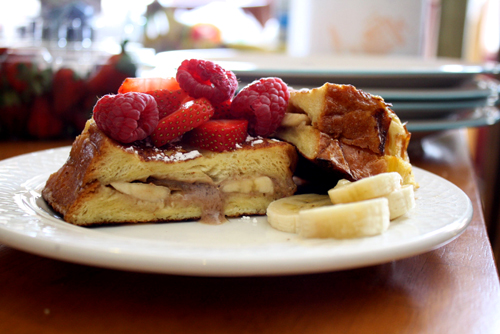 There’s nothing I love more than waking up after a big night out and cooking up a huge brunch with the people I was out with. It was the morning after the final LCD Soundsystem show at Madison Square Garden, and my friends and I decided to spend the morning/afternoon cooking and eating entirely too much food. Tony and Paul made a huge batch of biscuits and sausage gravy, we ate a bunch of cheese Tony bought at Murray’s Cheese Shop, and I took on the most amazing, decadent breakfast dish I have ever made. I never order this stuff when I’m at a restaurant — I always stick to the egg dishes — but my roomie Petra sparked the mascarpone idea and I went with it. I should also give props to James, who had the brilliant idea to add champagne to the egg mixture, which makes it a bit lighter and fluffier than normal French toast. This stuff was so amazing that Missy told me it ruined French toast for her — because now any time she eats it, she will only be thinking of this. (Photos: Thank you Joe and James, although I’m not sure who took what!)